Some of you have commented on how exhausting/frustrating/crazy this elimination diet process is and I agree! It is incredibly time-consuming considering the research into studies, the searching for recipes, the phone calls to grocery stores, the time my husband spends shopping, menu discussion, and cooking time…! Since none of my diet changes has made me feel any different, it seems like a futile process, but here is what I always keep in mind:

Some people, such as my brother, eat a paleo diet even though they are completely healthy ~ they just want to continue to feel great. Or feel even greater. Some people are diagnosed with a thyroid condition or an autoimmune illness and immediately change the way they eat, trying to ease symptoms or stop the progression of disease. I never even considered doing these things! I had one odd health issue after another and never changed a smidge about the way I eat. The doctors didn’t mention diet, so I didn’t think about it. I didn’t even research the things I was experiencing. This blows my mind more than anything. My time was fully committed to my job, there was no room for anything else. Plus, they were intermittent episodes (I thought) and I was still feeling fine (I thought), so everything was easy to ignore. I had given up alcohol, which, to me, was the ultimate sacrifice ~ do you think I would give up anything else? No way!

One of the best gifts I was given was my OBGYN off-handedly saying, “You should eat some salt if you feel like you are going to collapse.” Uuuuhhh…? Why didn’t I know that? I’d been limiting my salt for years because I thought it contributed to the swelling. Couldn’t just one of the many nurses that have taken my blood pressure over the years mentioned salt to me? They always comment on how low it is and I always let them know I get dizzy. “Try increasing salt.” Just that simple.

The other thing I always keep in mind is my dog, Bowie. When he was young, he developed bumps on his skin. The vet thought it might be a food allergy, so we changed him to a limited-ingredient diet. Over the next year -maybe two- his skin got worse and worse. We changed his shampoo, we washed him more, we washed him less, we gave him supplements, he was put on Benadryl. His coat is a beautiful, deep, glossy brown; he looks like a stallion. But the bumps got bigger, his skin was like braille, and his skin started to have a distinctive infected smell.

Then, one day in the dog park, there was a hand-written sign tacked to a post: “Natural Balance food is killing dogs!” It had some other info on the sign that I can’t remember, but there was nothing online that we could find. Regardless, we paid attention because that’s the brand our dogs ate. And then a miracle: Literally, a few days after we switched their food, we had two puppies back in our house. We didn’t even realise that their happiness and activity level wasn’t normal for them because that’s all we knew for so long. They were DANCING. They were LAUGHING. They were running around like we had just removed their shackles. And then Bowie’s skin made a total turnaround: The bumps and smell disappeared incredibly quickly. We were very grateful, but my heart was broken over the poison we had been feeding them. If anyone had witnessed the change, they would know the radical difference food can make to health.

Lastly, I never want to look back and regret not trying diet changes. One would think that time ticks by slowly when you are sick and housebound, but, it turns out, the years speed by quicker than ever. I don’t want to be 50 or 60 and wish I had tried this in the beginning of my illness.

So, after 3 weeks of eating sort of low-histamine and a month of eating strictly low-histamine, I was not feeling any better. In fact, November and December were probably the worst months I’ve ever had, but I blamed that mostly on repercussions from the tilt table test and IV fluids reaction. I’m sure the stress around a new way of eating and hypoglycemia didn’t help matters, though, so I allowed in some histamine foods (bananas, berries, lemon, some vinegar, all greens, all meat), but I have continued to avoid the biggies (fish, spinach, tomatoes, eggplant, pickled/fermented foods, dried fruit, leftover animal protein). I needed to increase my protein intake to stabilise my blood sugar and started force-feeding myself meat. It was joyless, like taking medication. I am eating this chicken so my blood sugar does not tank in the night… (picture me sitting in bed, eyes closed, slack-jawed chewing a piece of cold, dry meat, grimacing as I swallow).

Around the same time, I eliminated oats ~ the only grain I had never lived without and had, in fact, been eating every day in the form of granola/porridge and oat crackers ~ and that left me desperate for breakfast options that included protein. Beef breakfast patties became a staple. We started investigating all the butchers in our area and my husband talked to all the grocery stores. We figured out when deliveries come in, whether they are fresh or frozen, how long since the date of slaughter, and we buy grass-fed, pastured beef and lamb, organic chicken and turkey, trying to source the healthiest and freshest meat to continue keeping histamine in check. My husband cooks the day we buy meat and then we freeze portions so I have meals at the ready. He still makes beef bone broth and chicken stock, but we cook it in a shorter amount of time and freeze it in silicone ice cube trays and jars. Beef patties for breakfast. Lamb shepard’s pie, portions wrapped in wax paper. Chicken and turkey breasts that can be thrown in soup or chopped on a salad or served with rice pasta and topped with veg and sauce (see FOOD! page for some recipes). Blood sugar crashes became much rarer. 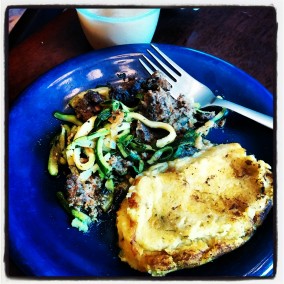 I started to feel a bit better overall in late January, right after my bad pre-syncope episode during my period and right after I quit oats. By “better”, I mean back to where I was around September/October of last year. Able to walk 800-1000 steps a day instead of 500, my daily headache got better. But still not going into the garden, not stretching, not able to talk very much. One amazing change is my heart rate has gotten much lower overall ~ almost too low. In the 70s and 80s when I am standing up, not moving. Mid-50s sitting, watching tv. Low-50s and high-40s sometimes, while lying down in bed.

I refuse to believe that eliminating oats made the change.
A) Because I love oats too much and can’t wait to eat them again. I HATE savoury breakfasts. Hate them. Make me sick and nauseous. I was the one going to the Irish pub for a Sunday fry with my family and ordering porridge or fruit, yogurt and toast. Every morning is a struggle. It has gotten easier, but it’s not enjoyable. I don’t want acorn squash and beef and kale for breakfast and I never, ever will. It’s one of the reasons I have continued to search for “baked goods” recipes and kept rice in my diet (so I can have rice cereal or rice toast, if I like).
B) Because nothing can ever be definitive in such a changeable, cyclical disease. I also stopped taking my B-complex around the same time. That could have been causing my headache everyday!

In the final diet post, I will discuss AIP (autoimmune paleo diet) and all the other complications and sensitivities one comes across when researching online. It’s enough to send anyone straight to the nearest fully gluten-ized and dairy-fied bakery.

12 thoughts on “DIETS Part III: finding a balance in low-histamine and figuring out how to eat more meat.”