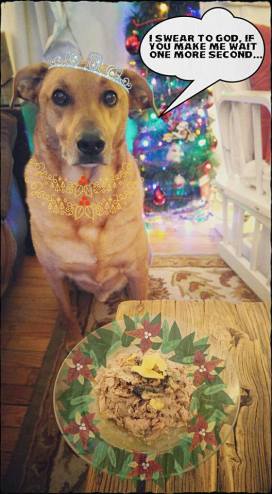 Like Lassie, our Riley communicates quite skillfully with a range of different barks. A few months ago, he came to me at the dining table with his stern, urgent bark. I looked around for Penny, knowing he was tattling on his sister. He used to do this with Bowie, too. “Is she downstairs getting into treats?” I asked him. That’s where I’d found her one day, head buried in a Greenies bag. As I went down the stairs, Riley’s barks got more insistent: Mama, wrong way. I looked back up the stairs at him. He stamped his feet with intent, faced the back door, barked more urgently. He might as well have pointed. I went back up, looked outside, and there was Penny on the porch, standing amidst scattered recycling, snout-deep in an empty dog food can.

He has another bark for person at the gate and another for stinging insect in the house and for dinner is late and for I’m too arthritic to play with these dogs, so I’m just going to yell at them for an hour.

Riley is the house manager. He likes to lie in the open front door, where he can keep an eye on the street, the garden and inside the house, too. In the winter, when I insist on a closed door, he’ll lie on the porch outside, but only if he can see me through the window. If I go out of sight, he’ll nose his way inside to make sure I’m okay, first looking upstairs, then the basement, staying with me until I am back by the window so he can return to the porch and continue his vigil.

He gets up in the morning with my husband, the early bird, sees him off to work and then, by 9am, he comes carefully clicking through the dark bedroom to rouse me for breakfast. I listen to his slow ricochet off of walls and furniture corners, as he navigates to the far side of the room, where his nose finds my face. At night, he puts my husband to bed, too, and then re-emerges a few hours later to escort me upstairs. 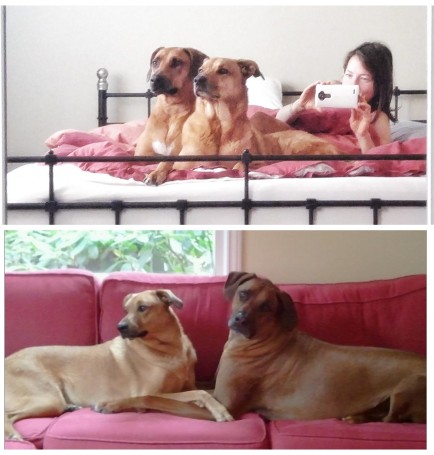 He protects his siblings, protesting loudly if anyone picks up Penny’s paws for clipping or cleaning or threatens her with a coat. He shoves his way in between us, offers up himself, instead. Take me. He did the same thing with Bowie, yelling at me if I tried to brush Bowie’s teeth or perform a rectal grass extraction. Except when Bowie was dying – Riley didn’t make a peep as I changed doggy diapers and forced endless pills down Bowie’s throat.

Riley is my self-appointed emotional support animal. When I’m talking to someone, he lies beside me on the couch, one paw on my arm, and if he hears emotion of any kind — annoyance, laughter, sadness — he’ll repeatedly claw at me. Stay cool, Mama. If I become more animated or raise my voice, he will clamber on top of me, put his weight on me, shield me, distract me. And, if all else fails, he turns into the court jester in the middle of the living room, the dancing frog from those cartoons: Look over here! See what I’m doing? 🎶 Hello, my baby…🎶 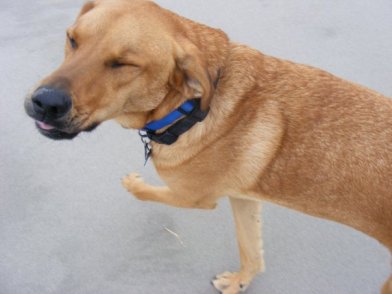 Yesterday was his 11th adoptiversary. My husband ran into a woman at the park who said Rally (his name at the time) needed a foster family. We took him in and, after 3 other forever-homes fell through and we were gutted each time he left, we copped on that he was meant to be ours. We were meant to be his. He’s about 12 or 13 years old now. He came to us emaciated, with half a tail, already arthritic, even as a kid. He almost died from giardia, swelled up from wasp stings, lost a toe and a bunch of teeth – and none of it ever slowed him down.

But this year, he’s suddenly old. Cataract-y eyes, rickety bones, staring at walls… And I’m thinking of what it’ll be like to not have him taking naps with me or lying outside my shower… How quiet it’ll be with no warnings of stranger danger or bad insects or Penny mischief. I’m reminding him more than ever how much he’s loved, how, even with the endless lint rolling and daily hoovering, we have cherished every hour of the last 4,016 days with him. And how incredibly fortunate we are to be the ones who get to accompany him through however many days remain. 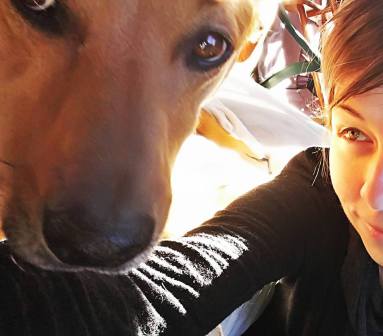 3 thoughts on “Our Old Man Riley”