I have had an itch under my jaw, deep in the tissue of my neck for years. In 2009, I decided to mention it to a doctor one day and, although she didn’t feel anything abnormal in the area of the itch, she did casually say, “You do have a lump on your thyroid, though.” I had a thyroid nuclear test done and a radioactive iodine uptake test which showed two toxic multinodular goiters.”Toxic”, meaning thyroid hormone was being produced at an increased rate, which is why my thyroid stimulating hormone (TSH) tested so low. “Multinodular” because it was a late-stage goiter, meaning it had been around for a while and had a chance to grow and become lumpy. In my case, I had been hyperthyroid for at least 7 years ~ my first abnormal TSH result was in 2002, but my doctors never pursued it and I didn’t know enough to insist.

This was my first experience with specialists. I had only ever dealt with general practitioners and emergency room doctors. The research doctors that diagnosed me were bizarre. They came into the room and peered at me like I was a specimen, their faces frozen into pensive seriousness. I started cracking jokes to break the tension, but they didn’t respond in kind. They asked me questions with long quiet pauses in between, during which they would look at each other and mumble and nod: Do you have flushing? Are you intolerant to heat? Do you shake? Stick out your tongue. Hold out your hand. Have you experienced any anxiety symptoms?  I finally stopped them and asked what they had found ~ they had told me nothing! Do I have cancer? No. Do I need surgery? No. Okay, now you can ask me more questions.

I had to do both nuclear medicine tests twice because too much time elapsed from my first round of testing to go forward with treatment ~ radioiodine ablation. After you have radiation treatment, you must stay away from people and animals for a few weeks, use different cutlery, use a different toilet and/or flush twice. It seemed like a big decision, but the doctors told me it was a terminal problem. I’ll never forget that. They said there wasn’t a very long life expectancy for people with untreated hyperthyroidism. Huh? Seriously? I didn’t seem to have a choice. So, I did it. I killed the whole thyroid and started taking hormones every day for the rest of my life. I never missed a day of work through this experience. During the segregation weeks, I holed up in the restaurant office, alone. I remember encountering a pregnant lady on my way to the rarely-used toilet in the basement and leaping back out of her space as if I’d been electrocuted… high-tailing back into the office so she wouldn’t be exposed to radiation. What must she have thought? 😉

Interestingly, I never felt like the symptoms abated. The flushing and hot flashes (my most visible symptoms, which I chalked up to oddly increasing self-consciousness) and the anxiety (which I blamed on my job) ebbed a little, but not much. And, of course, this was undoubtedly part of the priming of my body for ME. Hyperthyroidism and my anaphylactic episodes started about the same time. It was the beginning of the end.

Below are the photos and email that I sent to friends and family back then, hoping that it might open someone’s eyes to thyroid problems or make them listen a little bit more to their bodies. The fact that I thought I was having “devastating” and “debilitating” symptoms then strikes me as funny now… and sad. What was happening to my body because of my thyroid problems was NOTHING compared to what is happening to my body with M.E. They’re not even on the same planet … in the same universe. Can’t I go back to my old serious  health problems?

I have attached 3 pictures that I took before I got radiation treatment (ablation). The first is looking at my neck as I stand relaxed, the next is with my head back and the third was taken as I swallowed. I can’t believe I never noticed the lump on my thyroid. I can’t believe nobody else did. I can’t believe, with 7+ years of abnormal TSH (thyroid stimulating hormone) levels, neither a doctor nor I, myself, looked any closer at my neck or my symptoms.  [The radioiodine must have swelled my thyroid, however there was definitely a visible lump before treatment that I never noticed until it was pointed out -and it is unforgivable that no doctor ever took the time to look further into my bloodwork or palpate my throat.]

So, I guess I’m hoping this email influences everyone to pay closer attention to their bodies. Look closer: know every line and lump so you’ll recognise changes. Listen closer: if your body is constantly telling you it’s way too hot or way too cold or way too tired or way too hungry, don’t ignore it. Don’t wait for a doctor to find out what’s wrong with you ~ question everything that feels wrong.

It turns out I wasn’t overheated & flushing because I’d become suddenly self-conscious. It turns out I didn’t just “get lucky” with an amazing metabolism. I wasn’t having floods of anxiety that caused my heart to race & skip beats because my job was stressful. I wasn’t debilitatingly exhausted because I worked too much & didn’t sleep enough. Well, at least not entirely. 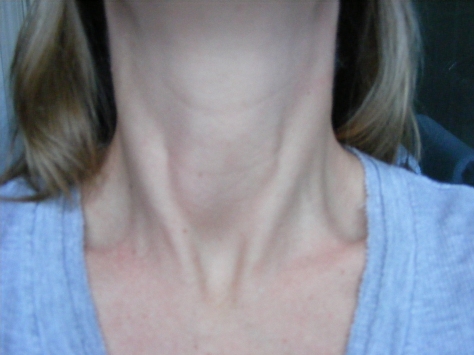 It’s still going to be a long road ~ my doctors say we could be tweaking my medication for years. I still vacillate between feeling ok and feeling dizzy and wasted… I eat about half what I used to… I’ll have to take hormones forever…. But, it’s not out of the question to go to a movie after a day’s work and I don’t spend my weekends crumpled in a ball, sobbing, asking what’s wrong with me while my husband wonders what to say….

I’m angry that I spent so long feeling that way and just explaining it away. I hope this inspires everyone to take a minute to think about your body and your quality of life. It’s all too short! Take care of yourselves! 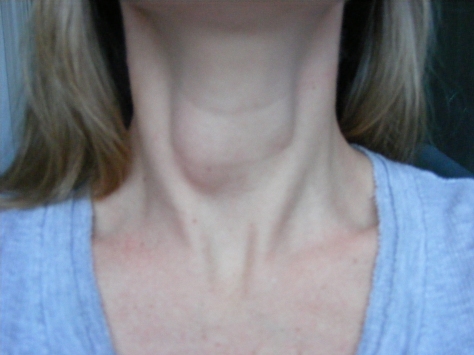