I was living in this house when I was 21 years old. My roommate from college took this photo a few days ago when he was visiting Madison, Wisconsin and posted it on Facebook. I was slapped in the face with so many memories: lying in the dark back room in the summer, the only room with air conditioning, listening to music; drinking Mickeys and playing Tetris wars; breaking plates and smashing the Atari in a collective rock ‘n’ roll meltdown; smoking cigarettes all night on that tip-top balcony outside my bedroom, having conversations I thought I’d never forget. I lived there with 5 or 6 men — boys, really, we were just kids — I think I scored the best room because I was the only girl. That school year (1994 to 1995) and the few years afterwards were the most emotional of my life. I can’t really think of a better word to describe them. It was the loneliest and saddest time of my life before this chronic illness, but also the most memorable, the most adventurous, the most creative years I’ve experienced. And all of it is inextricably entangled with music. I’d once made a sign for my Mother’s kitchen wall that said (it was multi-colored like this): NEVER BE WITHOUT MUSIC and I never was. I have an obscenely bad memory, but everything I remember from those years has a soundtrack. I think maybe the only reason I remember any of it is because there was music playing during each scene, searing them into my mind. 1995 was also the only time I experienced depression before becoming housebound and I truly, un-dramatically, credit certain bands with saving my life. 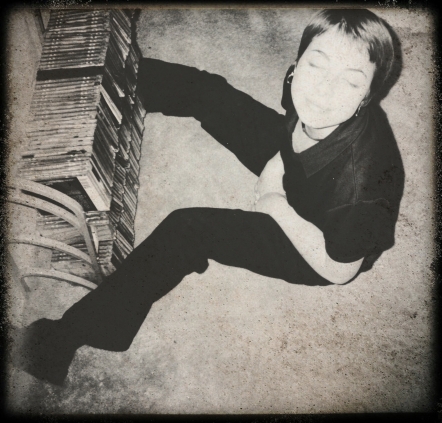 I’ve tried to listen to music a few times over the last four years, but it’s been difficult. First, because I was just too sick and was always striving for the closest thing I could get to silence. Background sounds are still difficult on a too-much-stimuli level, but as my headaches got better, I started to dabble in a song here and there and discovered that, even if I could handle the noise, the emotions unleashed were too much, like a tsunami against which I’d have to quickly close the floodgates for fear of drowning. Memories of sad times making me sad for who I was, memories of good times making me sad for what I’ve lost, regrets about past situations, gratitude for past experiences and abilities — all of it makes my chest start to heave and my breath catches in my throat and I go, “Oh, no way, not going there” and quickly switch to watching happy elephant videos. What I’d give to luxuriate in my old albums, in the memories they bring up and in hours of sobbing! And it would be a luxury — it would be cathartic and fun on some level to reminisce, but the indulgence would be far outweighed by the payback. My life is about equilibrium now; I try not to rock the boat. Plus, it’s really not as fun to go down Emotional Music Memory Lane without a bottle of whiskey. 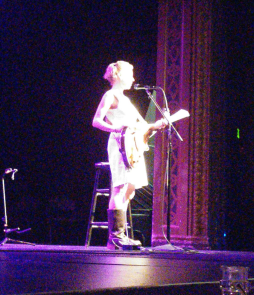 Having said that, 15 months ago, my brother in Connecticut told me that one of my favourite singers, Kristin Hersh, was going to be in Seattle. I thought it was kind of funny (and kind of sad) that my brother on the other side of the country had to tell me what was happening down the road, but I never look at local listings because it’s a bit torturous to see what I’m missing. I decided to go. It was a solo show in a small, mellow venue where you could sit down and eat while watching. Seemed like the perfect way to test the live music waters. And it went well. It was utterly surreal to be in a public place, especially at night. I felt like one of those animals allowed to walk outside on grass after spending their lives in metal cages. I was unsteady, gripping my husband’s arm, looking uncertainly at the steps, the ceiling and lights, eyes darting around at the crowd uncomfortably, hoping not to be seen in case one of them noticed the outsider and stood up, pointed at me and screeched like that scene in the old Invasion of the Body Snatchers. It was a wonderful night, the hardest part was gulping down the sneaker-wave of tears when she opened with probably my favourite of her solo songs. Again, that unreliable floodgate. It was the music, yes, but so much more. I was out at a show — out at anything, actually — for the first time in two and a half years. I was normal. Or, at least, doing a good job of feigning it.

Tonight, I’m trying again. Jeremy Enigk is playing a show in Seattle and my sister has connections, so she’s going to set me up in the VIP or ADA section. I’m so excited. I had seen Kristin Hersh live probably half a dozen times before, so last year’s venture was noteworthy, but not a bucket list item. But tonight… Enigk’s band Sunny Day Real Estate’s first album Diary was part of the constant soundtrack in that Madison house 22 years ago, so it’s fitting that that photo showed up on Facebook a day before I found out about this show. I took it as a sign. I doubt I would love that album as much if I were introduced to it now, but back then there wasn’t much like it and these guys were college students around my age. And … THAT VOICE. It ripped my angsty heart out.

I wound up fleeing the midwest in 1995. I drove alone across the country to Seattle (actually, to Bainbridge Island) during what would turn out to be one of the best four days of my life. No company, no mobile phones or internet back then, just me, a camera and my music. A year later, still lost in so many ways, I found Enigk’s solo album, Return of the Frog Queen, and, again, the timing was right and it became one of those keep-me-alive CDs.

So… tonight. I’m going to my second live show in almost four years and this time I have months of improvements under my belt. I haven’t slept well and I have a pretty bad headache (which is rare these days), but I’m not going to stay home to “be safe.” I may not know anything that he plays — I may not even like anything that he plays, that album is twenty years old, after all — but I’ve never seen him live, don’t even really know what he looks like and, if his voice can still do that heart-tug, stomach-clench wail, I might even let myself swim in the emotions for a change.
_____________

LIVE UPDATE: He’s playing some songs I know, I really like the stuff I don’t know and his voice can still hit the sweet spot. I’m floating (not drowning).