I have a research addiction. A knowledge addiction. A thoroughness addiction. I always have had. It’s manifested itself in various ways. Most recently, the countless hours I have poured into reading about people’s experiences with Lyrica before I’ve even popped a pill. But, I’ve always been this way. If I were traveling somewhere, I would read endlessly about the place I was going ~ from the cultural history to how to leave the airport to where to eat (after having read hundreds of reviews) to what attractions I wanted to see. I would look at maps for hours, so that when I arrived I had an idea of where I was and could orient myself to north, south, east and west. Before traveling, I would spend weeks comparing airlines and alternate routes. I would compare the various ways that I could use frequent flier miles and what sort of credit card bonuses I could get. I signed up for an American Express card purely to get the new card bonus and it worked ~ After adding a card for my Mom and my husband, I managed to get enough “miles” to get two free round-trip tickets across the country for a family reunion.

When I was in college, before I started a paper, I would read as much as possible on the subject to get a basic expertise, before I even knew what my thesis would be. But, I would do this to a fault ~ wasting weeks in the gathering-information stage and then pulling an all-nighter to churn out a paper that I never had time to proof read.

When I decided to go to graduate school, I researched colleges endlessly. To fulfill prerequisites, I took anatomy, physiology, organic chemistry and biochemistry courses, paying with my tips from waitressing. I volunteered at the University hospital, I paid dues to the American Psychological Association, I applied for scholarships, I gathered many reference letters and compiled binders of all information. I wanted to be everything, so I applied to multiple programs in Ireland and America. I applied for Master’s and Doctoral programs in different fields: two clinical psychology programs, forensic psychology, social and organisational psychology, dietetics (one that was research-based and one that was hands-on and clinical), two nursing schools and a program called The Existential-Phenomenological Therapeutic Psychology Master of Arts. Jesus! I got into every program but one, which began more endless research into the minute details of the programs, the job prospects after graduating, polling my friends, families, and customers to get advice…

In the end, I scrapped it all to become the manager of the restaurant where I worked. Revisiting my history now, it shocks me that I put so much time, energy and money into something and then just walked away. But I think I had invested so much that it overwhelmed me and the restaurant industry was a known ~ it was comfortable, I was good at it and it didn’t cost $50,000. My perfectionism kicked into high gear like never before. I wanted to prove myself so badly. I was willing to work any number of hours, any number of days in a row, for any amount of money. I made flash cards about the restaurant’s sales and finances, vendors, brands, inventory… I wanted to be ready for any questions my bosses might ask. I would literally study during the day at home and then work 10- or 12-hour shifts, leaving work at 3am. If I knew then what I know now! I thought I had to do it all. Nobody told me any different. I thought I had to know it all. I was expected to. I taught myself how to do my job; I called it my Master’s in Restaurant Management.

That job turned into a regional position and, eventually, I was in charge of the operations of seven restaurants as the COO of the company. For years, I was never home at night. For years, I was on the road visiting locations. And, when I finally transitioned to the corporate office, the anti was upped. Now we’re growing bigger, performance has to grow bigger, too. I was finally home at night, but I’d snarl at my husband if he suggested I stop answering emails while we were trying to watch a movie.

Until the bitter end, I compulsively studied the company to be prepared for any questions the bosses might have. For a long time, I knew every employee’s name in all three states. I reviewed costs, sales and schedules daily and made inquiries into anomalies. Why didn’t you have a host scheduled? Why were there only three people in the kitchen last night? Why was your labor so high on Saturday? Why did you clock out so early? Why are you ordering a different brand of oil? Why did you 86 salsa? Are you doing interviews? Why is your liquor cost so low? Why did the alarm go off last night? Have you completed your quarterly report? Why did you work 60 hours last week? I knew we had a different diameter straw and a thicker beverage napkin in our newest restaurant, two states away. I would work at rectifying those problems on the same day that I would have meetings with the PR company and interview general managers and discuss complaints with the executive chef and try to mediate HR controversies and taste the food in one of our restaurants, inspect the cleanliness of the bathrooms, talk to a server about dress code, review health insurance plans, listen to a manager’s frustrations, talk to lawyers about a guest that slipped, review and compare P&Ls, coordinate work on one of our build-outs (camera installation, chair order, lighting, employee training, liquor order, POS set up…), and talk to the owners about their next restaurant concept. I put together job position plans and, under “responsibilities”, mine said: “EVERYTHING”. This was true ~ my position had been formed under pressure, without much organisation, in a very quickly growing company, with incredibly high demands ~ but, it was also self-imposed. I wanted to be the best. I wanted to be indispensable. I wanted to be an understanding boss and a strong, knowledgeable leader. I wanted to be fair, but cut-throat. I wanted to be an exemplary employee who was never disloyal, money-grubbing, offended or overwhelmed. It was the most acute and most chronic addiction I’ve ever had. It was the hardest addiction to break and, in the end, the only thing that could stop me was a Myalgic Encephalomyeltis Intervention. After six months of trying to maintain that level of functioning, I gave up. I was getting sicker and sicker, crying in my car, worried I wouldn’t be able to make it home, shaking and sweating all night, unable to eat normally, unable to remember things, unable to get up stairs. And, once I left work, a new addiction began.

Which brings me to the reason I wanted to write this post. All day, every day, I read about ME/CFS. After I wake up, I lie in bed for over an hour, reading blogs and articles and books on my phone. I go to bed at 9pm, but spend three hours reading, lying on my side in the dark. I have countless books to read and hundreds of websites bookmarked. I scour medical studies and newspaper archives looking for treatment information, new theories, any tests I haven’t had done, research being conducted. I troll patient forums, looking for advice on drugs, asking what has helped them, taking my own poll of how many have recovered and where I stand on the Continuum of Evil. I have Nook books and real books and magazine subscriptions. I have emails with suggestions from my family and comments on this blog with advice from others with ME. I don’t watch tv without also reading my ipad (a gift from my former bosses). I don’t take a bath without reading an ME/CFS book. When I do my stretches, I listen to podcasts about chronic pain, mindfulness and meditation. I have underlined, highlighted, copied and pasted. I’ve emailed my doctors, corresponded with other patients, I have notes on pieces of paper, in the margins of books, in email drafts, and in apps on my ipad and a voice recorder on my phone. I beg my husband to help: “Please, there is so much to read, I need you to start helping me research. I don’t want to miss anything…” Like he wants to read about this shit when he has to live with it! 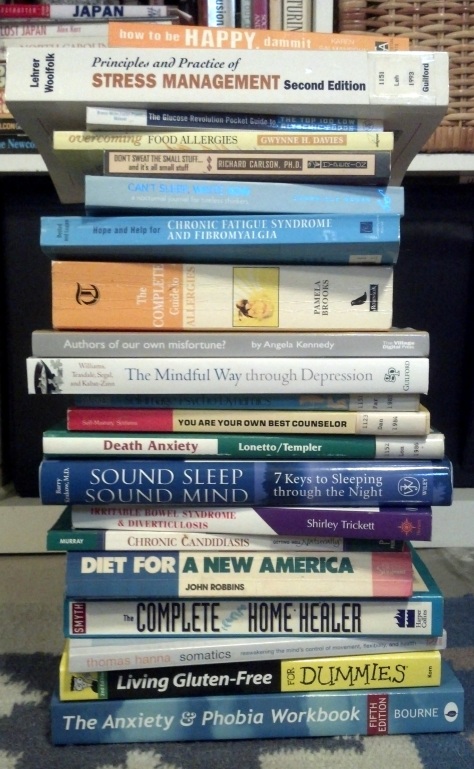 Last night, I lay in bed reading for three hours. After having a terrible day (IBS hell, headache, terrible back pain, aching hands, sore leg muscles, burning eyes, sore throat, low-grade fever, indescribable stiffness), I didn’t retire to darkness and peace to rest my brain and body… I read feverishly…addictively…as if there were a deadline…as if it would save my life. I get very distinct symptoms when I overdo things in this way. My eyesight goes haywire ~ blurry and jumpy, the words moving all over the page and what looks like Vaseline over my retinas. I get horrendous tinnitus, like the sound effects of someone’s brain after a bomb goes off in a movie. And, of course, my head throbs and my neck seizes up. Last night, my husband strongly suggested I stop reading and turn off the light. My hands were completely numb from all the blood draining out as I held my ipad up, my shoulders were tense and my eyes burned. “But, I need to figure out how to fix me“, I said. I did stop, though, until, a half hour after lying there trying to sleep, I grabbed my phone again and started reading blogs by other ME/CFS sufferers. And I did the same thing when I woke up at 5am. And I did the same thing when I woke up at 8am. And, as soon as I finish this unbelievably long post, I’ll probably go do it some more.

The irony is, I make myself worse trying to make myself better. Even now, writing this, I know I will pay dearly for how long I’ve been typing, but I’m compelled to finish. I need an intervention again. And I need an exorcism. I need Father Damien to stand over my bed and yell, “The Power of Health compels you!” while splattering me with fish oil. Maybe one day ME will stop possessing my body and I’ll move off the grid where there are no computers, mobile phones, electricity hums, florescent lights or Xbox games. Somewhere that’ll allow me to become addicted to cooking or walking or gardening or laughing. Or living.

4 thoughts on “The Illness of Addiction”